One of the first things you’ll notice in your first scuba dives as a newbie is that you could feel extremely cold in a very short time as you travel below 50 meters underwater. Without the proper supplies, being underwater for an extended period of time below 20 degrees Celsius will lead to hypothermia. As a result, one of the most important things to consider when scuba diving is the water temperature.

So as you are preparing your dive gears and getting ready for scuba diving; The sensible thing to do is assume that the temperature could remain variable and might get unusually cold during the operation. However, the water temperature varies more along the vertical lines than it does along with the horizontal distance. We could travel great distances on the water’s surface to detect a substantial temperature change, but we can detect vertical temperature variations of up to 20 ° c  within few meters. A gradient is a rate at which temperature changes as a function of distance. Have you ever begun a surface dive at 27 degrees Celsius and ended at 19 degrees Celsius at a depth of 20 meters? If you replied yes, then you have crossed a thermocline, the ocean’s greatest temperature gradient!

The thermocline is the layer that separates the warmer water at the surface of the ocean from the colder water underneath the ocean surface.

It’s a layer of depth spectrum in which the water’s temperature declines significantly as we descend. As this coating of rapid transition fades, the temperature level in the thousands of meters that remain on the ocean floor becomes almost stable; underneath the thermocline, the entire amount of water is about 13 degrees Celsius in the Mediterranean. The consistent thermocline, which usually occurs at great depths during the year, demarcates this separation (inaccessible by diving). It stretches from 200 to 1000 meters in mid-latitudes.

Thermoclines usually occur seasonally depending on the change in weather. The static transition zone can be a very thin layer, less than one-meter-thick, that forms shallowly during the spring and early summer and then fades away in the fall. When we dive between two water layers divided by a thermocline, the water takes on the look of transparent glass, which leads to loss of vision. This is because as the temperature and density of water change rapidly, the reflective attributes of water change.

The abrupt rise in temperature causes a difference in water density, which causes a decrease in the speed at which the pulse propagates, fooling the echo sounder. The thermocline is easily visible on the profile as a result of this.

A diver is affected by a thermocline in many cases:

Why are thermoclines formed?

The intense heat from the sun that falls on the ocean’s surface is what causes thermoclines. The sun’s light energy heats the water surface layers but not the lower layers, resulting in a temperature contrast between the surface and the ocean’s lower regions. The temperature drops steadily as you travel deeper into the ocean depth below the junction of two cold and hot layers, resulting in a thermocline.

Seasonal thermocline forms during the colder months, when the temperature contrast between the warmer surface layers and the colder depth increases. In the winter months, it vanishes again. If the difference in depth vanishes, the deeper waters can reach and merge with the surface waters. The mixed layer is a layer of homogeneous conditions usually present, but it is much thicker in the winter season.

The constant exchange of energy from the surface layers to the ocean depth would lead one to believe that the temperature differential between the surface and the abyssal water will vanish, but this is not the case. The abyssal waters are not watertight, but they are constantly supplied by the poles’ cold waters, which, after settling in the polar regions, float across the globe along the ocean floor and surface in other parts of the world. Because of this, permanent thermoclines can be found in nearly any part of the globe.

Where and when are they formed?

Thermoclines occur in oceans and other water bodies. There are even atmospheric thermoclines known as the tropopause.

As a result, thermoclines do not form very thin at high latitudes, such as in the polar and subpolar zones. Indeed, the surface waters can be much cooler than the depth ones, which results in a thin or even no thermocline during the summer months.

Surface temperatures are higher during the year in mid-latitudes -between the subpolar and subtropical zones- than they are at abyssal latitudes, which is why permanent thermoclines shape between 200 and 1000 meters. Furthermore, they differ greatly from season to season: in the winter, when surface temperatures are lower and waves are more energetic, the mixed layer reaches great depths. The ocean’s upper layers form a seasonal thermocline as the surface temperature rises and the water becomes more stable in the summer.

Ocean surface temperatures are usually much higher at low latitudes – near the equator – and the difference with ocean depths is larger than at any other latitude on Earth. This leads to the severe thermocline, with low-temperature levels of 20 degrees Celsius in the water layer ranging from 50 to 200 meters.

Thermoclines also occur in lakes. Warm water is found at the lake surface with a thermocline separating it from the cooler, denser water in depth. There is no mixing since the warm water is exposed to sunlight throughout the day. When the summer progresses, the available oxygen decreases as the water underneath the thermocline rarely flows to the water surface, and life in the water depletes. When winter begins, the water surface temperature will fall as heat transfer is dominated by overnight cooling.

With the arrival of winter, the temperature of the lake surface begins to drop. The water immediately under the ice will become super-cooled, dropping to temperatures below 4 degrees Celsius, while less concentrated waters nearing the freezing point comes to the surface.  You can see this influence in the waters around the Northern hemisphere, where freshwater rich in nutrients is brought to the water surface, replacing the original water on the surface while being low in oxygen. This enrichment of surface nutrients could result in phytoplankton blooms, keeping these areas more active.

Atmospheric thermoclines, often known as the tropopause or inversions, exist when the Surface of the earth cools at night, resulting in damp, thick, yet sometimes quiet air adjacent to the land. The night-time temperature variation is usually lost shortly after sunrise when the sun’s radiation warms the earth’s surface, warms the air in the inversion layer. The colder, less concentrated air then rises, undermining the nightly inversion’s equilibrium. This occurrence is often utilized in the study of noise pollution.

The thermocline is a layer that separates two masses of water that are at varying temperatures. The warm water stays afloat because they are less dense than colder water. However, when two water bodies, one of fresh water and the other of saltwater, collide, halocline occurs.

This influence is difficult to notice and happens most often when freshwater enters the sea. The Cenotes of Mexico have the highest and most dramatic views of this phenomenon. The Riviera Maya is made up of a soft rock made up of ancient fossilized corals that looks like a sponge. As a result, the rock collects much of the rainwater, which then runs deep into waterways. Seawater seeps through the rock as well, where both fresh and saltwater converge at a point to shape a halocline. However, this is also a thermocline; It’s the density and temperature variation that amplified the outcome.

Divers travel from all over the world to visit Mexican cenotes. It is possible to have a visibility of more than 60 meters. Divers will spend an entire week scuba diving in various cenotes. Natural cycles such as haloclines and thermoclines are incredible. The effect’s radius of reach is just 1 meter / 3 feet.

How to identify a thermocline

Thermoclines are fascinating and can catch even the most seasoned divers off guard. Always prepare ahead for thermoclines when you are going scuba diving. Wear thicker wetsuits to keep warm when the temperature varies underwater. Suppose you have encountered thermoclines while scuba diving; tell us your experience in the comment sessions below. 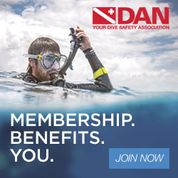